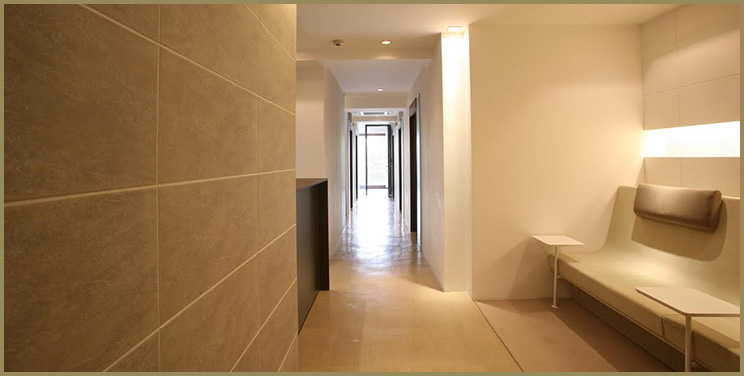 Hours:Monday through Saturday 11am to 7pm 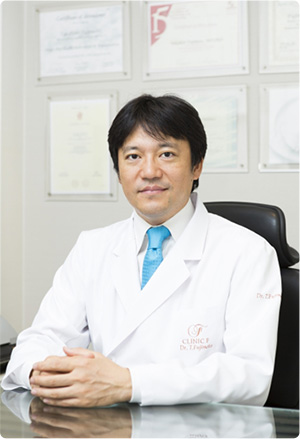 Takahiro Fujimoto is a medical doctor so far known as one of the top LASER Anti-aging specialists in Asia.He was born in the heart of Kamakura,Kanagawa Prefecture on March 2nd in 1970.

He became infatuated with the world of optical microscopy,engineering and electronic equipment at his very young age which led him to dream of becoming a scientist when he grew up.
Respecting the will and professional career of his grandfather, who also was M.D. and known as a pioneer pain clinician in Japan,Fujimoto has focused his profession in the field of medicine and has strived to become an anesthesiologist specializing in pain management.

After attaining his medical degree he has made his step forward at the Department of Anesthesiology in University of Tokyo, where he became involved in research on somatosensory stimulation and autonomic nerves.

He has faced his first transition in his career when he got a chance to learn about pain therapy called “Low-Level Laser Treatment (LLLT)” at The University of Tokyo Hospital's Pain Relief Center.It was like a revelation to him that the high level optical devices such as LASER have such an ability not only of curing pain and improving the status of patients but also in different medical areas that would enrich the QOL of patients.The potential and the diversity of LASER devices have shown him his future as a medical practitioner specialized in precision machinery.

After he acquired specialist certification from the Japanese Society of Anesthesiologists and the Japan Society of Pain Clinicians,he has moved to the department of laser dermatology, which involves both advanced engineering technologies and biomedicine. Fujimoto went on to acquire Ph.D. in Surgical Science from the Graduate School of Medicine, The University of Tokyo with research on mast cells which control the skin’s immune cells.

He continued his energetic involvement in clinical and research activities and made presentations at academic societies,conferences and workshops in Japan and abroad, while also joining the graduate school of a university with strong reputation in science and engineering as a mature-age student. He acquired his second Ph.D. In engineering from the Graduate School of Engineering, Tokai University in the field of electrodynamics, quantum electronics and optical sciences after submitting a thesis titled “A Study on High Temperature Heat Source Generation with a Low Power Level Quasi-CW (continuous wave) Semiconductor Laser and Its Medical Applications”.

He is currently conducting research about the laser-assisted drug delivery system, a new treatment option of the 21st century, at a Graduate School of Pharmaceutical Science.

In addition, he researched and developed the new EMS system called “AC Body” in 2008 for treating metabolic syndromes. In 2011, he became the advisor for “The Asian Aesthetic Guide”, a technical journal for laser treatment specialists, and achieved joint development of medical laser devices in partnership with a number of overseas medical device manufacturers including the Dutch company Royal Philips. In 2014, he published “Science of Body Contouring --- Use of Latest Medical Equipment”, analyzing body contouring and weight loss with the use of medical devices from the perspective of medical science, nutritional science and engineering.

He has also become a shareholder in a laser clinic chain based in Jakarta, Indonesia, steadily expanding the areas of involvement.

Clinic F, launched in May 2007 as his 5th medical clinic, is comparable to internationally-renowned anti-aging laser clinics in NY, LA, London, Paris, Milan, Singapore and Hong Kong in terms of hardware lineup and technological capability.

The Clinic is steadily building a solid reputation even among Japanese people living overseas as a ‘laser clinic worth flying in for’.

In his private life, Fujimoto grew up in a musical family, with both of his parents well versed in brass and woodwind classical music. He himself is also well known for his passion for classical musics and operas. At his Clinic F in Yotsuya, Tokyo, a collection of classical tunes he has carefully selected is always played as background music in order to alleviate pain associated with laser treatment. For this reason, patients who attend the Clinic include a number of professional opera singers, pianists, violinists and other performers of musical instruments.

In 2010, he published “Music That Eliminates Your Pain” from YAMAHA Music Media, explaining the relationship between music and autonomic nerves, hormones and pain.

2011
11/2011 7th Annual Conference of the Chinese Academy of Dermatology in Beijing,China
10/2011 20th Congress of the European Academy of Dermatology and Venereology in Lisbon,Portugal
09/2011 Workshop The Action of Fullerene and Vitamin C Derivative Cosmetics on Laser Therapy by Hong Wo Pharmaceutical Co.Ltd. in Hong Kong,China
07/2011 IMCAS Asia in Singapore
07/2011 International Conference Advanced Carbon Nanostructures in St.Petersburg,Russia
05/2011 CLEO:2011 The Conference on Lasers and Electro-Optics in Baltimore,USA
03/2011 ASLMS American Society For LASER Medicine and Surgery 2011 Annual Conference in Texas,USA
02/2011 AAD 69th Annual Meeting in New Orleans,USA
01/2011 IMCAS Annual Meeting 2011 in Paris,France